A Triad in Three Acts
the complete forester trilogy 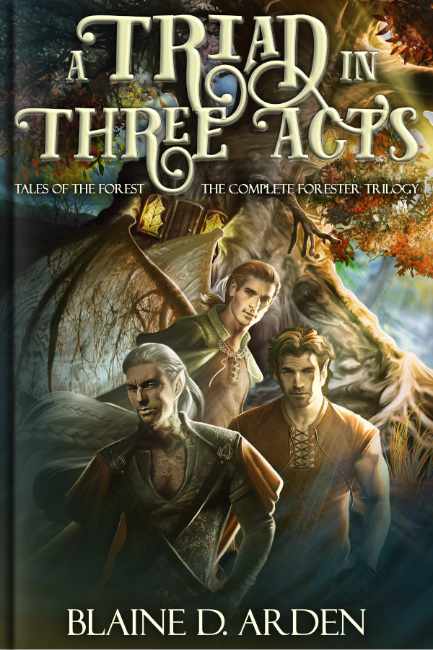 “There is always a way.”
Kelnaht, Taruif, and Ianys are meant to be together, but old promises and the decree of the elders prevent them from claiming each other openly at Solstice. Kelnaht can investigate murder and foul play, but he can’t see how he can keep both his lovers without breaking the rules. But if he believes in the guide’s words and trusts his faith in Ma’terra, they will find a way to clear the fog and puddles from their paths.

The Forester
Kelnaht, a cloud elf, is a truth seeker caught between love and faith, when a murder reveals an illicit affair between two tree elves he desires more than he can admit. Kelnaht’s former lover Ianys once betrayed him, and the shunned forester Taruif is not allowed to talk to anyone but the guide, their spiritual pathfinder.

Lost and Found
A stripling goes missing from the tribe, and heavy rainfall hides all traces of his whereabouts. With days creeping by without a lead, it’s hard to keep the tribe’s spirits up, more so when Kelnaht’s own future depends on the elders. Taruif has been shunned for almost twenty turns, but now that a possible forester’s apprentice is coming of age, the elders consider reducing his sentence. Taruif could be set free.

Full Circle
When several children fall ill with more than a summer bug, truth seeker Kelnaht is assigned to investigate. What he finds is deadly and threatens the life of every underage child in the tribe, including Ianys’ daughter Atèn. Then a wounded traveller is found in the forest, left to die after a vicious attack.


Stories set in the Tales of the Forest series can be read as standalones and in any order, except for the Forester Triad trilogy.

The Forester (Forester Triad Act One)

OTHER BOOKS IN THE TALES OF THE FOREST SERIES. Check out Blaine's series extras.