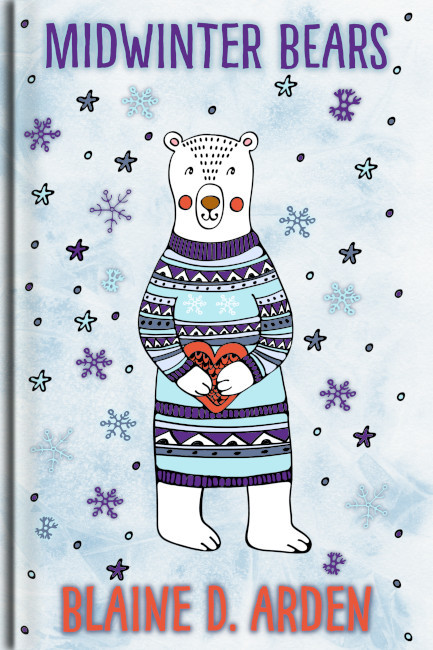 Tahl promised Enfys ice bears for Midwinter, but ey neglected to tell him that ey and eir kin were the ice bears.

Part of the Rainbow Calendar 2018.

With Midwinter blowing in, my life resembled a melting mess.

On the one hand, the sun smiled on my house with Enfys moving in soon. On the other, ice nibbled at my feet as I'd promised to take him to see the ice bears during the celebration, but had yet to tell him I was one of them.

I wiped my clammy hands on my woollen dress as I stared out the window at the cubs building snow sculptures. It was the tip of the iceberg of things I hadn't told him during our eight months of courting.

Enfys and his family hailed from the tropical southern island of Taranau Ynys, an almost two-day flight from Kalbuhr, my beloved but cold northern island city. While his work as a natural programmer took him all over the world, his busy schedule had only allowed him a handful of visits after our first meeting. He had given me one of his communication gadgets, so no matter where he was, we spoke every day, even if only for a minute or two.

Not even those daily conversations could bring me to reveal the secrets eating at me when we were together. Our relationship was too new, and our time together too precious to risk letting them running Enfys off like they had my exes. It had nothing to do with my fear of losing him once he knew the truth. Or so I kept telling myself.

Now, I had mere days before Enfys flew in to stay, and I was no closer to finding the right words to express the way I felt when he was with me, and how deeply it shamed me to have kept this from him for so long. All I had was a desk strewn with crumpled attempts.

I shoved my chair back and dragged myself down the spiral stairs with heavy heart. Might as well do one last check of the house. Then at least that would be perfect when Enfys arrived, even if nothing else would be.

The bedroom had been sorted months ago. While Enfys had insisted the stairs weren't a problem, he had fallen in love with the double tub in the generous en-suite bathroom of my office downstairs. The rooms were of a similar size and easily swapped so Enfys could enjoy a bath without having to cross half the house, or tackle the stairs. Besides, I'd chosen my bedroom because, contrary to Enfys, I was not much of a tub person. The shower room connecting the upstairs rooms had been more than enough for me, and less surface to clean, too.

These last few weeks, I'd spent most of my free time clearing away anything Enfyss could stumble over. He used a cane and echolocation to get around indoors, when his robot wasn't nearby, and could probably move around most obstacles, but it made me feel better to make the house ready for him. To make it a home for him. Even my office.

The house felt better for it, too. I wasn't a sludge by any means, but doing this for Enfyss made me realise how often I left stuff in the middle of the floor. A bag here, a box there, a stool pushed into the middle of the room, that sort of thing. Even now I found several pillows blocking the path to the sofa. I picked them up and put them back where they belonged.

It was still strange to see the gap between the hall and the thick floor-to-ceiling window in the living room where one of my bookcases had stood. I'd moved it into my office to leave room for Enfys' robot. He would have been content to leave it in the hall, like he had during his visits, but the robot was, in a way, his office, and it deserved a dedicated space in the living room.

Something bumped into the window, then slowly slid down. A snowball. Three cubs ran off when they caught sight of me, giggling and screaming. I stared after them until they disappeared deeper into the city. The cheeky shards made me laugh. They reminded me of my own cubs' shenanigans at that age.

Snowflakes put on a wild dancing show in the street as the winds picked it up a notch. Still, the force of any storm within the containment spell covering the city was much milder than the heavy ones often raging above them. By design.

Many generations ago, one of our elders had calculated how much energy it would cost our clan to create a shield that dampened the worst effects of the weather. Turned out, only a tiny portion of our daily energy was enough to stop the need to dress for battle to visit neighbours for some gossip. It had the added benefit of keeping our cubs enjoying the snow far into winter.

If Enfys were here, I'd describe it all to him, from the cheeky cubs and their snow sculptures to the dancing snowflakes. He'd probably insist on going outside the walls in his too-thin bright green coat—insulated linen he called it—laughing that deep belly laugh of his when he'd be blown off his feet. Everything seemed an adventure to him.

I'd given him a proper heat-treated woollen northern island coat on our second meeting, but I had to prompt him to put it on to keep him from freezing to death. Of course, I hadn't yet known that a natural coder like Enfys could easily manipulate the air to create a warm shield around his body.

It hung on the peg next to the door, now, waiting for him to return, to stay...

If he could forgive me.