An Invitation to Love 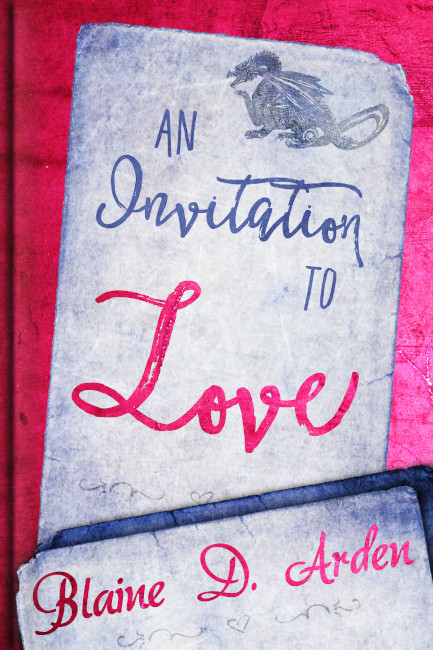 When Dominick has to attend a six-day dragon mating ceremony, he wants to avoid speaking to anyone for fear his severe stutter will send possible suitors running.

However, Lysander and Zachary, both from different cultures with a thing for redheads, refuse to let him hide. Worse, they actively pursue him, even after Dominick mucks up their first encounter.

Against the backdrop of a ceremony that takes testing endurance, strength, and acoustics to new heights, differences between languages, customs, and expectations create an obstacle course where any misstep could send the men home… alone.

Standing on top of Owain ridge on the border between Ayneia and Craw Nook, I clutched my present for Buttercup and her mate-to-be to my chest. Moving to the edge, I spread my wings, catching enough of the breeze to let it lift me off… as soon as I was ready. I swallowed. Noises from the foot of the ridge, faint as they were, kept me from taking that final step. The hustle and bustle below most resembled blurry rainbow coloured ants, but with less discipline. As Buttercup’s chosen patron, I should mingle with the guests—a mix of Drachus, Ura, Ganesh, and Phae like me—but hunger and nausea threatened to turn my stomach at immersing myself in the crowd for her six-day mating ceremony. Maybe Mother had been right, and I should have declined the honour Buttercup had bestowed on me. But how could I? We’d been working together for close to seven years. I couldn’t abandon her now. Despite my shortcomings, that was not who I was.

Flapping wings alerted me to approaching company, and I scanned the ridge to figure out where Buttercup was coming from. Who else would look for me here? My family lived a five-hour flight into Ayneia away. I couldn’t help but smile as she approached from my left, rising against the steepest side of the mountain. She was so elegant in the air.

Buttercup was an average-sized Drachus. She had an elongated head twice the size of mine, four hefty legs, a long pointy tail, sharp claws one didn’t want to be in the way of, and a wingspan large enough to shelter a small group of children against the rain. Her pearly pink scales glittered in the sunlight, set off by the dark pink colouring of her belly, her wings, and the tips of her ears and tail. We made quite a pair patrolling the borders between Ayneia and Craw Nook. Buttercup in pink, and me with my red hair, and red, yellow, and orange wings.

She loomed up in front of me, blocking the light. I stepped back from the edge. She hovered a Drachus length away, her eyes thin strips of gold, seeming none too happy with me.

«I’m sorry,» I signed in Drachus, a one-handed sign language created to enable conversations with the nations surrounding their land. It wasn’t the Drachus’ native language. That consisted of many throat-aching growls, grunts, and rasps impossible to emulate if one wasn’t built to produce those sounds.

Lips pressed tight, Buttercup shook her head. «You promised me you’d try, Dominick. No one expects you to speak anything but Drachus.»

Nothing I hadn’t tried to tell myself, but it didn’t make it any better.

«Come down with me. Thumper’s becoming impatient.»

Buttercup’s mate-to-be, and the formidable second in command to Craw Nook’s leader, Little Rock. His name never failed to make me smile. Partly because Buttercup once told me how he thumped his tail on the ground when he didn’t agree with something as a nestling, and partly because one of my sisters had a pet rabbit with the same name.

Buttercup flapped her wings, creating a gust of wind that blew me backwards. She snorted. «Working yourself into a frenzy, you mean.» She turned in the air, spreading her wings and using her tail for balance. «Stop dawdling and fly down with me.»

Stamping my feet would make me resemble the juvenile she sometimes treated me as, so I lifted off and hovered alongside her.

«You’ll be fine, Dominick. Your Drachus is flawless.»

Buttercup knew better than anyone it wasn’t my Drachus I worried about.

Victoria Zagar at Infinite Love: "This is a free read from Storm Moon Press and I absolutely recommend it, even if you’re usually shy of M/M/M pairings. This is a great introduction to this kind of relationship as each character is patient with the others and there’s a real emotional bond between the three that never feels like it should be just M/M and never feels abusive or pushy. All three of these men clearly want this relationship and it shows. A great read."

Serena: "Interspecies relationships can be complicated enough due to different customs and/or expectations, but add a severe speech impediment, different languages, and a variation of ideas about mating and you have a true challenge. I love the fact that all these factors were what made the three men struggle how to relate to each other, not the fact they were gay or trying to be a permanent triad. If you like fantasy, if you enjoy reading along while trying to figure out the different species and their cultures, and if you’re looking for a read that is interesting and slightly quirky as well as hot, then you will probably like this free short story."

An Invitation To Love © 2013 Blaine D. Arden. All rights reserved